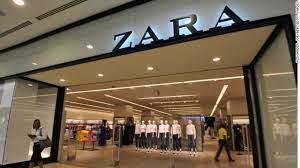 Panic not unless you live within 150 miles of zip code 77056. That's your closest Zara— in Houston.

Everyone else: breathe a sigh of relief.

The Zara Houston Galleria closed on March 29 to renovate. Great! Except they won't be open again until fall. No temporary quarters anywhere. Closed. Boarded up. Not even a sign, but word has it "fall" is the target re-opening. Extra bonus good news: the new Zara will be two stories thus two times bigger. Of course this will take six months; they have to saw through the ceiling!

I won't miss customer service at the old Zara; it doesn't exist. That's not the same as bad customer service. The associates do their jobs, but that consists of staff the fitting room, ring up customers, put away go-backs. No outfitting suggestions or personal shopping. I won't miss the fitting rooms either; they are freezing. Despite all this I can't helping thinking what are those folks doing about jobs in the meantime?

The first Zara opened in Spain in 1975 and was originally to be called Zorba, but a nearby bar of the same name objected. One of the earliest purveyors of "fast fashion", it manufactures all its own goods (all over the world) and never advertises (one of few retailers who do not). The differences between Zara and its competitors H&M, Top Shop, Forever 21, etc. is a fairly sophisticated style ethic that picks up on designer trends before anyone else (and quickly). Quality fabrication and manufacturing belie the reasonable price tags. Plus Zara has its own "cool" and doesn't try to mimic those high street or mall neighbors.

And what will I do? Shop online? I've done it before, and Zara by mail is quite efficient. But I've only ever cyber-shopped when the store was out of my size. Feeling and fit are still two important reasons to get yourself into a bricks and mortar establishment. The nearest Zara is now four hours away— in Austin. Road trip, anyone?


Posted by allwaysinfashion at 11:49 AM