The Lifetime network knows it has a good thing in "Project Runway" and is planning to unleash some "filler" between the end of this season and the beginning of the next. This Project has no projected end.

As an aside, the current crop of point of view-less designers has me underwhelmed. They all claim to want to show the judges "who they are", but as weeks go by they only seem to know who they aren't. "I don't design for the modern Southern woman," one said. That whole challenge was such a trumped-up payback for some store named Belk. I live in the south and have never seen one.

What's coming? "House of Versace" stars Gina Gershon in full pout and platinum blond wig as Donatella Versace. This made-for-tv movie chronicles "Donatella's inspiring triumph over tragedy by carrying on her brother's legacy." Raquel Welch is listed in the cast, and it looks, by the previews, that they may have resurrected Gianni Versace to play himself. Premieres Saturday, October 5 at 8PM Eastern.


Next up is "Million Dollar Shoppers" where we will "enter the never-before-seen and elite world of personal shopping, where there are no limits to what one will do to find the perfect wardrobe for their rich, famous, powerful and often high-maintenance clients." The preview is loaded with bitchy remarks and full melt-downs. I'm not sure if the client or shopper was doing the bitching and melting. As a personal shopper at Nordstrom for two years, the "demanding" clients were the most interesting. There were never tantrums on anyone's part. Friendships were formed that were totally unexpected. I am going to hate this; I will also watch without blinking. Premieres October 10 at 10:30 PM (after Project Runway)


To paraphrase Betty Davis in "All About Eve"— hold onto your remote; it's going to be a bumpy ride.

Posted by allwaysinfashion at 8:08 AM 2 comments: 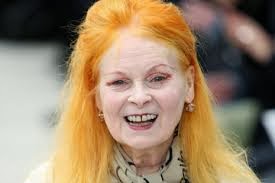 Vivienne Westwood caused a bit of ruckus after her recent London runway show. She was quoted as saying, "Buy less. Choose well. Make it last. Quality, not quantity. Everybody's buying far too many clothes. I mean, I know, I'm lucky. I can just take things and borrow them and I'm just okay, but I hate having too many clothes. And I think that poor people should be even more careful."

Good advice, you say? Except for that bit about "poor people", which makes me feel poor because of course I'm not rich. Hers are thoughts to ponder indeed.

Don't we all have too many clothes? The time is coming when I am seriously going to perform an exorcism on my closet and see what's left after the dust settles. I'm embarrassed at what I've forgotten or have worn once or— gulp— still carries price tags. There are things I love and things I loathe and things with which I feel no attachment whatever.

What has tied everyone's knickers in a knot (I think Dame Vivienne would like that expression) is the fact that she is indeed a DBE, a legendary designer and still in the business of selling clothes. "The Last Punk"(as she calls herself) was really the first (successful) punk, teaming with Malcolm McClaren in 1971 to make clothes for his boutique at 430 King's Road, London. McClaren was the impresario of the Sex Pistols, the most notorious and commercially viable of punk rockers. That same success would seem an antithesis to the punk movement, but plenty of "regular folk" delighted in dressing the part.


Westwood was serious about her embrace of the punk style movement. Over the years she has used fashion to express her political and human rights beliefs. I'd go so far as to credit her with inventing the slogan t-shirt (what would Urban Outfitters be without them?) She didn't invent punk style— it came from the kids, the street, the club-goers with little money and lots of safety pins— her touch gave it a kind of beauty. Over time she has woven this aesthetic with Scottish tartan elements and seriously tricky tailoring and produced some gorgeous clothing worn by celebrities and available in locations from the original King's Road store (now called World's End) to boutiques in Milan, Paris, Los Angeles and Hawaii.

The Dame has a few other things to say worth hearing:

On aging:
"Everybody looks like clones and the only people you notice are my age. I don't notice anybody unless they look great, and every now and again they do, and they are usually 70."

On being controversial:
"The only possible effect one can have on the world is through unpopular ideas."

On looking good:
"You have a more interesting life if you wear impressive clothes."

On fashion:
"I never look at fashion magazines. I find them incredibly boring."

"It doesn’t mean therefore you have to just buy anything cheap. Instead of buying six things, buy one thing that you really like. Don’t keep buying just for the sake of it."

On the next generation:
"I don't have faith in young people any more. I don't waste time trying to communicate with them."

On the importance of looks:
"I think dress, hairstyle and make-up are the crucial factors in projecting an attractive persona and give one the chance to enhance one's best physical features."

At 72 Vivienne continues to promote her causes, still pulls out all the stops on the runway and shows no signs of retiring. Nor should she. As a delightful, quirky, Creative she is proof that who you are has no term limits.

Perhaps her remarks about buying less are not so disingenuous. Once I clean out my closet and save up perhaps I can own a genuine Vivienne Westwood myself.

Posted by allwaysinfashion at 11:08 AM 2 comments:

Notes from the Urban Safari


There's no way I wouldn't look like a tourist in Italy. Aside from the camera, guide book and poor language skills I would still have "American tourist" written all over me. I may try to blend in with the locals (who are sensibly not at the Uffizi during high season) but end up a fish struggling upstream in the hordes of tourists dressed like tourists.

Tourists! A euphemism for poor fashion choices. I'm always amazed to see people 5,000 miles from home looking like they are heading to Home Depot. What made you decide to pack that, I wonder.
Since I'd never be mistaken for a native, I decided to join 'em, but try to do it with a little style. I looked at the assault on Italy as an urban safari. Here's what I packed and what happened when fantasy met reality.

A cross-over bag screamed "tourista" at 300 paces, but it was fabulous to have hands free and scads of zippered compartments. At times I forgot which of them held important stuff like tickets or passport, but I'm sure that busload of sightseers behind me didn't mind a little wait... In fact, I liked this bag so much that I'm loathe to consign it to the closet now that we're back.

I've got a secret for you: dresses are the most comfortable thing you can wear. You can sit, move, catch a breeze, feel like a girl. Because Italian women also wear dresses, you can also feel like a native. The time someone asked me directions— in Italian— I was in a dress.

I also wore a dress to travel— with practical leggings. It was a kind of safari shirtdress in a silky blend that didn't wrinkle. The "belt" was an attached elastic (yes every TSA officer asked me to remove it). One problem— after five flights and two train trips, I'm now pretty sick of it.


The black leather jacket in the photo was a last-minute decision and a happy surprise. It's unlined, soft and supple and has no closure. It was the perfect choice for evenings and chilly mornings. I didn't want to pack and wrinkle it, so it became part of the Travel Outfit. Funny... I'm not sick of it.

What's a safari without a safari jacket? Crushable and lightweight, my safari jacket gave me a touch of Christine Amanapour. You know, like I travel all the time.

I hooked an umbrella on my shoulder bag and used that instead of a hat. Apologies to anyone in St. Mark's Square who got stabbed in the eye.

I also brought a clutch for evenings to give the shoulder bag (and shoulder) a rest. I carried nothing much but a lipstick. Nevertheless, fearing purse snatchers, clutch it I did.


While I pictured myself skipping through Italy a la Audrey in little flats, the reality was more like heavily fortified sneakers (at least for the sightseeing part). This was Italy. I mean, can you say "cobblestones"? I whipped them off whenever possible. Try as I may I just cannot put together a decent outfit of street clothes with sneakers at the bottom. Italian women wear sandals. I don't know how; it must come with the territory. Sometimes the fantasy has to face...