Do You Spot a Trend Here? 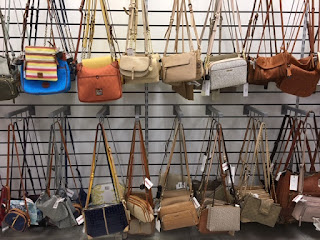 TJ Maxx is not known for its visuals, so when my local TJ's received a huge shipment of cross-body bags, how else to display them? This was only a third of the length of wall; you can imagine what an impression those bags made. Like, is this a trend???


Cross-body bags are nothing new, of course. They started as the practical way to tote a  big old messenger bag around and save your shoulders.


Over time cross-body bags got smaller, the size of a normal handbag. This became a neat way to carry a bag while freeing up your hands.

I discovered the ease of a cross-body bag a few years ago. It was to be an on-the-go-no-lolling-around-the-pool vacation and required an adjustment to the giant, heavy leather tote I usually hauled around. My cross-body was strictly utilitarian, made of lightweight nylon with zippered compartments and two zippered pockets. This was a revelation. It was amazing how much could fit in such a small space (and how little I really needed).

The latest crop of cross-body bags are smaller still. What else do we need save a phone, a credit card, a lipstick and some Tic-Tacs?

So while they're not new, this year they seem to be A Thing. I'll bet TJ Maxx hopes so.
Posted by allwaysinfashion at 9:00 AM No comments:

Not an Easter Wedding 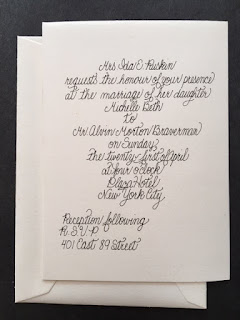 Today is my wedding anniversary. It's also Easter, but it wasn't Easter in 1968. It was just Sunday, April 21. As weddings go, ours was pretty low-key. That is, I wasn't stressed, probably because I let my mother do all the planning. She was very good at those things; I assume hers was a labor of love.

We had forty guests, and it was surely one of the smallest weddings New York City's Plaza Hotel ever held. We served hors d'oeuvres, champagne and wedding cake. For music there was an accordionist to play "Fascination", an homage to one of my favorite films, "Love in the Afternoon".

I'm sure you don't want to hear more details. Like, my husband's office sent a giant bouquet of lilies. Was that supposed to be a joke??? And we stole the sign posted outside our event:

The true subject is my dress. My mother made it from a photo I saw in French Elle, the one written in French, that I couldn't read. She sewed it with one broken arm. I can't remember how she broke it. It was healed by my wedding day. 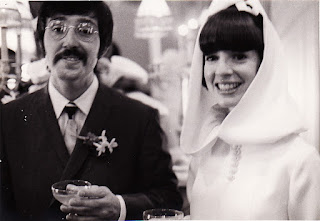 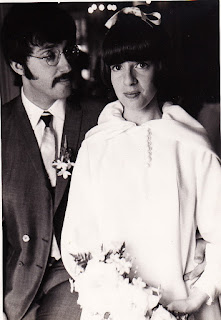 As this was 1968 the dress was barely fingertip length, stopping halfway up my thigh. Today we would call this a tunic. It was made from the most perfect white crepe. The wonderful hood was attached and turned into a collar. I can't believe how my mother covered all those buttons and made those loops. She might have had helpers.


My wedding was truly a blur. I wore glasses back then but decided Not on My Wedding Day. So if you were there, I'm sorry I didn't see you. After we shooed our guests off to their own dinners (felt a little guilty but no one seemed to mind), my newly minted husband and I had dinner at L' Etoile, a French restaurant that had once been the Playboy Club. After dinner, a carriage ride through Central Park.

Yes, yes, it's a fashion blog. So this is fashion (or was then): Next morning my husband was denied entry to the Plaza restaurant for breakfast. Although he was wearing a sport jacket and a turtleneck sweater, he wasn't wearing a tie. Hard to believe there was a time when a man had to wear a tie to breakfast at the Plaza, but his wife could wear a blouse for a dress.

PS Sadly this story does not have a happy ending. The dress was packed in a cardboard box and landed in the attic of our Victorian-era house in Westchester County. So much ended up in that attic, one weekend many years later we rented a dumpster and had a massive clean-out. I could never find the box again. All in all, I'd rather have the husband than the dress.

Posted by allwaysinfashion at 9:33 AM 5 comments: