Giving This the Cold Shoulder 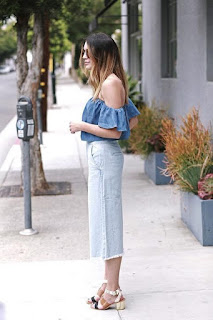 I'm giving summer's hot off-the-shoulder trend a pass. Reluctantly. It's a fun look— and new. We haven't seen many fresh trends lately, just lots more of the same sailor stripes and chambray and track pants and clunky trainers (Brit-speak at least sounds more chic than "sneakers").  Bill Cunningham has spotted enough bare clavicles on the streets of New York already to fill his "On the Street" column in today's New York Times. Every window in the mall shows the look in mutiples. It's arrived.


As a WOACA* my problem with off-the-shoulder is my problem with shoulders— lack thereof and/or morphing into an osteo-arthritis widow's hump (premature as I'm still happily married). In other words, I'd be looking rather too much like Mary Todd Lincoln in a shoulder-baring silhouette.


It's a shame when we have to "call it" on account of age, but call it I do. I'd like the world to know that's the only reason I haven't latched onto the look, and the world should be grateful. I hope those of you with time on your side will opt in and wear one for me. Cheers!

* Woman of a Certain Age
Posted by allwaysinfashion at 5:07 PM 6 comments: 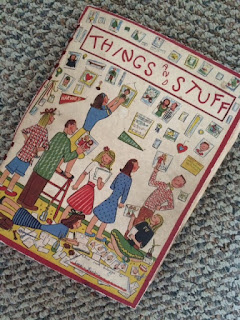 When my sister Lonnie died last year it was left to my nephew to comb through the collections of her life. And my sister saved everything. He was lovely to ask what I wanted. One memento meant the most— her Betty Betz "Things 'n Stuff" scrapbook. She had started it the year she turned 15, her freshman year in high school. I was not allowed into this teenage world as I was only 6, though I would sometimes be reluctantly dragged along on outings (her reluctance not mine). What I would do was pour through her scrapbook when she was out of the house, being very careful and always putting it back in its hiding place.

It looked like being 15 was the most wonderful thing in the world. Never mind what was the true outcome of that. Many years later, when I admitted to Lonnie how I would sneak peeks, she told me she always knew but had let it go. We were both then very grown up women, looking through the scrapbook again, this time together.

With "Things 'n Stuff" now in my possession, I relived not only my life but hers. One thing I had forgotten was a page she drew titled "Fads of '48". She obviously had every intention of making a record for all eternity.


It's always interesting how fashion fads begin. Try to remember that in 1948 we may have had movies and magazines, but nothing was instantaneous, and there was barely any television. Even developing photos at the drugstore took 5 days. Nevertheless fads existed and, by the looks of my sister and her friends, were followed. Herewith: 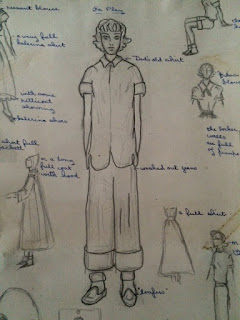 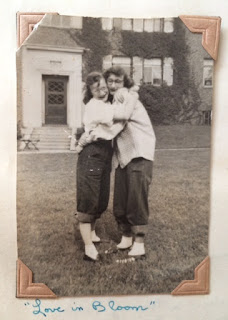 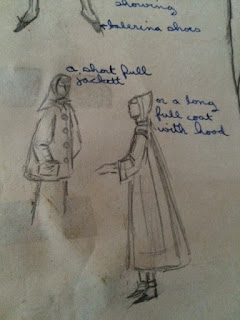 "A long full coat with a hood" or in this case, a babushka. 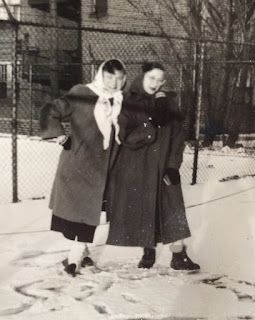 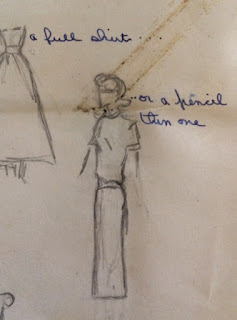 "A full skirt...or a pencil thin one" 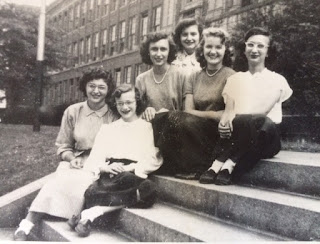 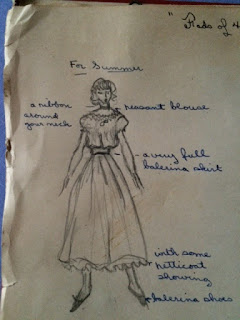 "A ribbon around your neck, peasant blouse, a very full ballerina skirt with some petticoat showing, ballerina shoes" 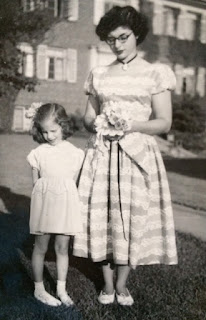 The ribbon (with cameo), the peasant blouse and full skirt as a dress, ballet flats. I'm on the left, squinting as usual
Posted by allwaysinfashion at 8:27 AM 3 comments: No one has mentioned this... no one dares bring it up... but why are former fashion luminaries in the televised home shopping business and peddling dreck? So far none of them have urged me to keep watching by shouting out Ron Popeel's famous catch-phrase, "Wait, wait... there's more!", but I'm waiting. 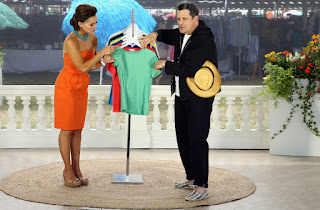 I cringe whenever I watch Isaac Mizrahi on QVC (and he's on several times a week). I cringe because he presents the most common denominator basically boring stuff with an even more manic dose of Isaacness than is his usual. And I love Isaac Mizrahi. His couture years were great. His career-reviving ISAAC line was lovely (and affordable pour moi). His Target collaboration was fun. But the QVC line is just embarrassing. He might say, "You have to pay the rent, honey." And I would say, "Isaac, please find another way." 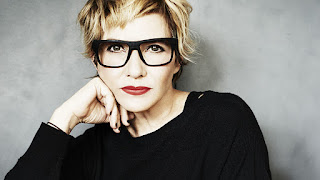 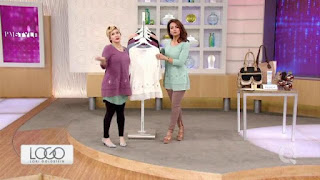 There's Lori Goldstein, a formerly hip and high-fashion editorial stylist in New York who worked for Vogue and Vanity Fair with famed photographer Steven Meisel. She's now selling t-shirts and stretch pants in simpering pastels cut to hide the jiggly bits on QVC. Lori's fun to watch as she bounces all over the place adjusting the models, and her New York accent reminds me of home. But the stuff looks flammable, not desirable. 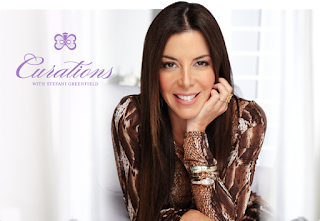 The latest to emerge from a fashion pedigree onto the tv screen is Stephani Greenfield. A founder of one of the trendiest NYC boutiques, Scoop, she was the ying to Diane von Furstenburg's yang on the ill-conceived tv reality show "House of DVF". This show, Curations with Stephani Greenfield, purports to promote fashion inspired by her travels to exotic places. I tuned in to see the formerly high priestess of chic decked out like a bag lady you would cross the street to avoid. Would I buy what she was selling? Are you serious?

Is there even a place for fashion on tv? We all laughed at the idea of online shopping for anything you need to try on. Now we're all doing it. At the Lovely Boutique Where I Work half my day is spent processing returns from the online store. As much as we know it probably won't fit, hope springs eternal, and pushing the "buy now" button is easy. 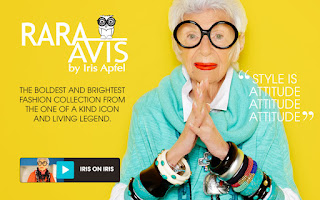 The only person who seems to have gotten it a little bit right is the now 94-year-old Iris Apfel. In 2011 she debuted a line of jewelry— copies or in the spirit of the costume jewelry she loves. Much of the stuff is really fun. Some of it is overpriced ($499 for a beaded glass necklace). She needn't apologize for the jewelry, and I don't think less of her for selling it. But then Iris Apfel can do no wrong...

Posted by allwaysinfashion at 10:12 AM 2 comments: 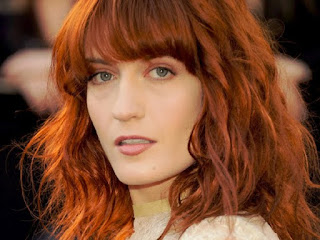 I'm usually pretty immune to the latest Flavor of the Month. That's why past subjects of Women We Love have all been seasoned players. Florence Welch (the Florence in Florence and the Machine), though only 29, hardly just fell off the turnip truck, but our paths crossed the other night when I saw her perform at an outdoor venue in Houston. I knew who she was, of course, but seeing her on television or in a magazine is way different from being part of a loving crowd on a beautiful late Spring evening.


What I saw that evening was a woman in complete command of the music, her musicians and the audience, but who nonetheless could have been that girl alone in her room dancing and singing as if no one were there. She performed barefoot in a beautiful long chiffon dress— more Valentino than Stevie Nicks. Her trademark red hair is worn long and loose— Alice in Wonderland with bangs. She wore very little makeup — probably a good thing because she worked up quite a sweat.

It had been many years since I'd been to a rock concert, and I'd forgotten about the crowd's anticipation, the burst of welcome and enthusiastic response to favorite songs. My companion thought Florence talked a little too much, but that's what made Florence no machine.

Florence Leontine Mary Welch is British (English father, American ex-pat mother). In 2009 her group Florence and the Machine released a first album, "Lungs", to wide critical acclaim. No real critic would make this comparison, but Florence is almost an English Taylor Swift— her songs are 100% personal and have broad appeal. Both are designer muses (Gucci and Chanel for Florence) but still have their own sense of style. It's easy to see how designers would respond to her pre-Raphaelite looks— strong and delicate at the same time.


She describes her look as, "For the stage, it's The Lady of Shalott meets Ophelia...mixed with scary gothic bat lady. But in real life I'm kind of prim". Musical influences are Grace Slick and Francoise Hardy. It's easy to see that in her choice of stage attire as well.


Florence may be a style enigma (enigma Machine— get that?) as she obviously responds to her moods and can morph chameleon-like into what suits her. For two hours the other evening I was part of her world, and it was a lovely planet to visit.

Posted by allwaysinfashion at 12:11 PM 2 comments:


Sometimes I shut the closet door and start outfitting the house. It doesn't happen often, but we're doing a "refresh" (aka painting every room with total disruption to life as we knew it).  Repainting means moving the furniture and packing up the tchotchkes.

The first thought is always, "How did we get so much stuff???" Along with a little weeding comes acknowledgment of dingy lampshades or cracked plant pots that should/must be replaced. Seeing your home naked makes you think of new ways to dress it. Then comes a good long session at Homegoods or on Overstock.com. I challenge anyone to repaint her rooms without replacing so much as a shower curtain!

My mother was a stylish but disciplined dresser. She decorated the same way. When it was finished, it was done. Her challenge came when we moved, which was whenever the lease was up. Mother didn't like the fact that landlords could raise rents. She always managed to rearrange the furniture seamlessly in the new layout and was only stymied once.

We moved into an older building with a fireplace flanked by extensive built in bookshelves. Talk about focal point! We were not a family of book owners. Library cards, yes. Hardbound books? Not so much. Mother's solution was to hit estate sales and buy books by the boxes. She took off whatever covers there were and recovered them in either turquoise or hot pink glazed paper. They were then assembled on the shelves in a pleasing abstract pattern. The books were not for reading; they were Art.

Over time I got curious what was under those papers and would amuse myself (if she wasn't home) taking a peek. No Hemingway first editions turned up, but I did read some 1940s potboilers like "Forever Amber".

My mother's very good taste in furniture has stood the test of time. I am fortunate to have her pieces by Harvey Probber (living room) and Paul McCobb (bedroom), as bright and stylish as they were when new in 1953.

I never understood the logic in going through the trouble and expense of moving to counteract a rent increase, but we had freshly painted walls and newly polished floors in one fell swoop. Now I see...

Posted by allwaysinfashion at 10:02 AM 3 comments: 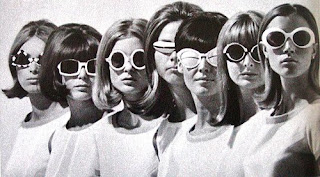 This is what I see coming down the pike
on May 4th: 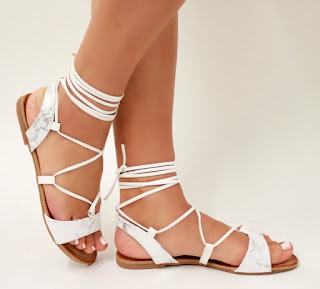 > Laces in general
(As in nautical not lacy) 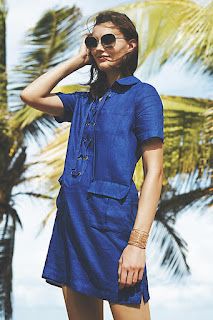 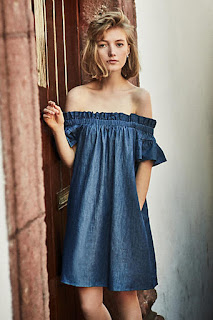 > Fringe
(on bags and hems and trims) 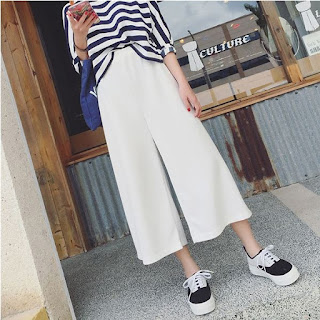 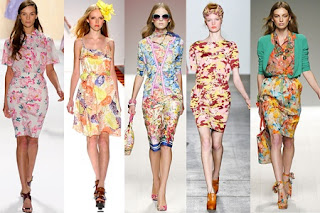 > Jumpsuits
(or rompers if age appropriate) 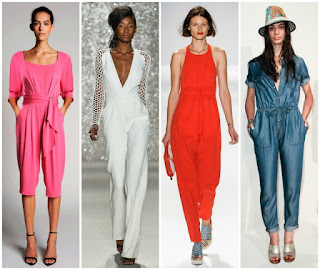 In the Summer Hall of Fame:

> Chambray shirts
(wear with everything) 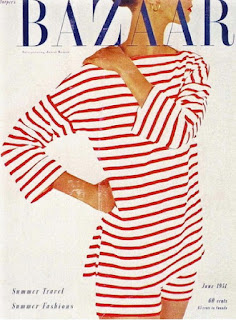 May the fashion forth be with you!
Posted by allwaysinfashion at 8:53 AM 4 comments: