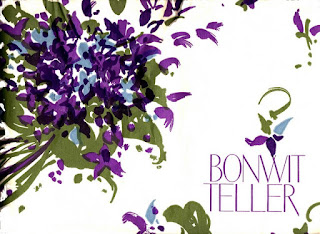 As a lover of fashion, New York City, shopping, old department stores and violets, it was terrible to read this in the NY Daily News.

I don't expect you to haul out your magnifying glass to see it, so please allow me to transcribe.

BACKSTORY:
Bonwit Teller and Tiffany shared the block of Fifth Avenue between 56th and 57th Streets. The building with the 56th Street corner opened briefly in 1929 as Stewart & Company. Considering the year, we can have a pretty good idea what happened to it. Bonwit Teller bought the structure in 1930. The pre-existing 15-foot tall limestone relief panels depicting nearly nude women became known as a "Bonwit Teller signature".

NY DAILY NEWS, AUGUST 18, 2017:
"President Trump thinks destroying sculptures is bad— but that wasn't always the case.
Trump Tower, the skyscraper that put the former real estate developer on the map, was steeped in controversy after the future President reneged on a promise to save valuable pieces of artwork.
The contentious tale goes back to 1980, about a year after Trump bought the Bonwit Teller building on Fifth Avenue and 56th St.
The Metropolitan Museum of Art offered to take a pair of sculptures from the 11-story Art Deco building, which Trump planned to raze to make way for the Trump Tower. Trump ordered them destroyed anyway.
John Barron, a Trump Organization executive later revealed to be Trump himself, told the New York Times the preservation was scrapped because 'the merit of these stones was not great enough to justify the effort to save them.' The faux spokesman also told The Times the sculptures weren't even worth $9,000 in 'resale value'.
At a party at his Grand Hyatt Hotel in November  1980 attended by a New York magazine reporter, Trump said the gold table cloths and lion's head medallions there were 'real art, not like the junk I destroyed at the Bonwit Teller.'"
— Terence Cullen 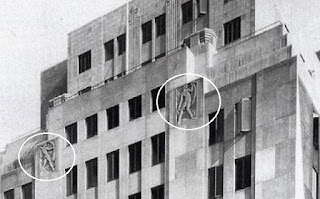 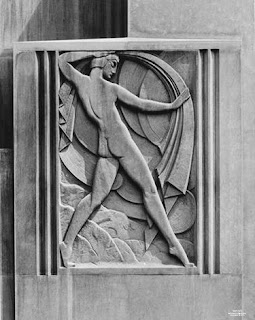 "Can you imagine the museum accepting them if they were not of artistic merit?", a spokesperson for the Met's Board of Trustees told the New York Times at the time. In addition to the bas reliefs, the huge Art Deco nickel grill over the front entrance, also promised to the Met, disappeared. The faux spokesman, "John Baron," again said "We don't know what happened to it".


One person did manage to capture a bit of Art Deco history. Louise Sunshine, a real estate developer who worked for Trump for 15 years has one of the bas relief heads in her Miami Beach apartment.


Posted by allwaysinfashion at 4:49 PM 10 comments: 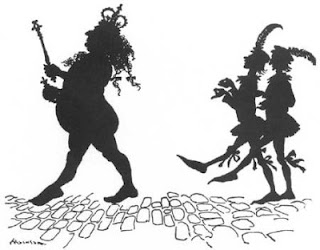 One of my favorite fairy tales as a child was "The Emperor's New Clothes". It would have been read to me from a volume of Hans Christian Andersen's stories. The book had few pictures, which was fine. I could easily imagine the pompous old emperor in his underwear, thinking he was outfitted in the finest cloth ever woven. I was always the child in the crowd who cried out, "But he hasn't got anything on!"

It's probably no coincidence that my other favorite Andersen tales were "The Princess and the Pea", "The Poor Little Match Girl" and "The Red Shoes"— all fashion-related in a way. What can I say? It started early.

For those not familiar with "The Emperor's New Clothes", the emperor was a vain fellow who cared more about clothes than running his country. He was convinced by two would-be swindlers (not named Bannon and Scaramucci) that they could weave beautiful cloth with magical properties. Only one worthy of his position could see it. The fabric would be invisible to the unworthy. The emperor dearly wanted a suit cut from this magical cloth. He paid the weavers their exorbitant fee and was assured by his ministers that the cloth was magnificent (though none of them could see it). The emperor couldn't see it ether but would never admit to that. In the end he parades before his people clad only in his underwear. It takes the little child to say out loud what everyone was thinking.

His courtiers were afraid to tell the emperor what almost everyone else knew. There were no clothes. He wasn't wearing any. People were laughing at him. And when people are laughing at you, it doesn't matter whether you are wearing nothing or a long red tie and a boxy suit.
Posted by allwaysinfashion at 9:05 AM 2 comments: 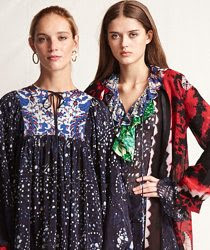 Though it's only the first week of August, in the alternate world of retail it's beginning to look a lot like... Fall. This should come as no surprise to anyone trying to find a bathing suit (which are relegated to the nether reaches of the clearance racks). It's traditional to haul out the autumn offerings before one could ever need a pullover sweater or wool pants.

Retailers do not reveal everything. These are teasers to whet your appetite or coax you into buying something irresistible for fear it might be gone later. What I've seen en masse at the mass marketers (in this case Target) looks like Boho overload— racks and racks of ditsy prints, dark florals, lace, trim of every description, puffed sleeves and way too many kimonos. Stevie Knicks in a fun-house mirror.

Now I like a little luxe louche as much as anyone. A bit of droopy chiffon swathed in furs gets my Biba-addled heart all a-flutter. But Boho en masse in cheap synthetic fabrics just makes me go Boho, oh no.

Surely not there again! Haven't we revisited that look too many times already? Does this mean I have to put away my kimonos in order to stand out? Is there nothing truly new?

Think I'm going to let the dust settle before I settle on this.


Posted by allwaysinfashion at 6:09 PM 2 comments: