Unlike other women I've written about who are blessed with more than just a good-looking facade, I knew nothing about Beatrix Ost other than she is a stunner. 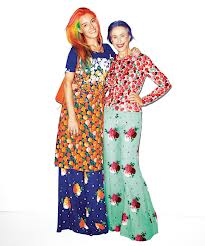 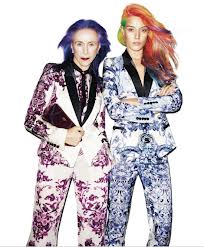 As I'm a little behind in my reading, it took till now to catch her in the November 2012 issue of Harper's Bazaar. I have no idea (or interest) who is the redhead. A little bit of Googling, and it turns out Beatrix Ost is someone who has not relied on looks alone to create a fascinating, accomplished life. A writer, an artist, a designer, a theatrical producer— she would appear to be Renaissance Woman circa 2013.

Beatrix was born in Germany in 1940. "In My Father's House", about her childhood during and after WWII, has received very good reviews for its lyrical prose and insight about the period. Beatrix (Trixi to her friends) studied dance and art, modeled extensively, acted on stage and in films. She was a single mother with two children when she met her husband, Ludwig Kuttner, in 1967. They married and had another son together. Beatrix and Ludwig moved to New York City in 1975 ("out of a sense of curiosity and adventure") to raise their family. 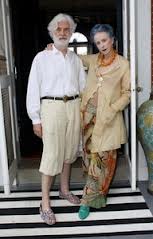 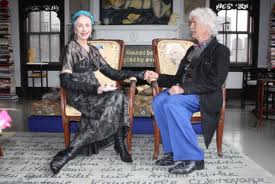 My guess is Beatrix' sense of curiosity and adventure permeates her life. When their country house in Cold Spring, New York, burned to the ground in 1981, Beatrix (that sense of adventure again) swung a pendulum to determine their next move. The pendulum stopped at Charlottesville, Virginia, on the exact spot of an historic, early 19th century home up for sale. The house, called Estouteville, is furnished in an eclectic style that is also Beatrix's own.
She claims not to be a "shopper", but to purchase what she loves and wear it for years, updating and refining, reveling in the new as it speaks to her. She has avoided being labelled an eccentric by personalizing her look with her eyes open. Yes, Beatrix looks great in a turban, but she rocks a fedora as well. Either way she is not having any bad hair days.

Do we live up to our names? "Beatrix" derives from the Latin meaning "traveller" combined with a later spelling invoking "blessed". If there's one great lesson in admiring Beatrix, it's not to throw away the baby with the bath water. We are what we are, and the longer we've been at it the richer is that person. One's own life experiences— and all the observations we've had of life around us— clothe our person in a most colorful way.

Like to know what the lady herself has to say? Go to www.beatrixost.com

Posted by allwaysinfashion at 8:50 AM